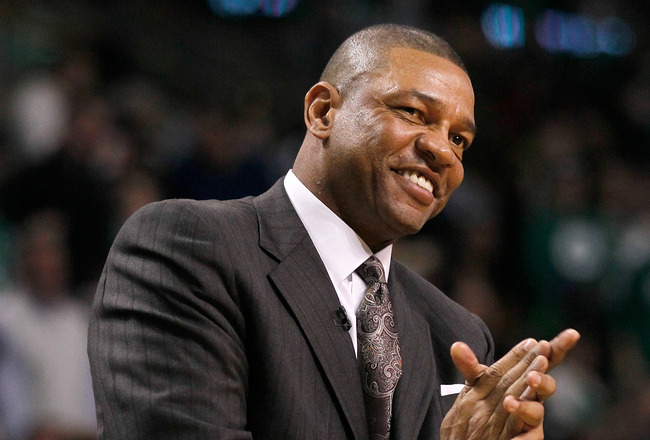 Prior to Saturday’s game with the San Antonio Spurs, Los Angeles Clippers head coach “Doc” Rivers, who is also the organization’s senior vice-president for basketball operations, addressed the rumored trade of Blake Griffin for Carmelo Anthony.

Check social media sites and you’ll find Knick and Clipper fans battling over the latest rumor of a Carmelo Anthony and Blake Griffin trade. Never lacking an opinion, here’s mine.

This is the silliest trade rumor that has been floating around for more than two weeks and it started in the New York Knicks organization that is desperate to solve the problem that is Carmelo Anthony.

Relying on a years old declaration that CP3 (a/k/a Chris Paul) and Melo want to “team up” a la the Heatles, someone in the Knicks organization planted the seed that the Knicks and the Clippers were talking a trade between the two teams with Carmelo going to the Clippers and Griffin going to the Knicks. Where they made their first mistake was adding in that the Knicks, pie-eyed dreamers that they are, also wanted a first-round draft pick in addition to Griffin for Melo. That, in and of itself, is ridiculous.

Their second mistake is that Blake Griffin is still an improving player and box office for the Los Angeles Clippers. Griffin has gotten better with each successive season. Once again this season, Griffin is averaging a double-double.

Mistake #3: People who think all Blake does is dunk obviously don’t watch the Clippers on a regular basis. Blake is a decent ball-handler and the mid-range shot and perimeter shot that people have been wanting him to develop HAS been developing and used on a regular basis this season. People love to compare Griffin to Kevin Love and compare their production. What is never mentioned in those comparisons is Love is two years senior in league experience despite only being six months apart in age. Don’t people think those two years count for anything?

Mistake #4: As I’ve pointed out elsewhere, Chris Paul, while playing well, is not playing to the same level as he’s played in prior seasons. People who only look at stats and don’t look at games won’t necessarily realize that. However, situationally, Paul’s shooting from the field and from the free throw line has been poorer than previously.

Mistake #5: The popular perception among NBA reporters is that Clippers’ owner Donald T. Sterling embarrassed Doc Rivers in second-guessing Rivers on trading away Eric Bledsoe. A la David Stern, Sterling was prepared to veto the Bledsoe trade but was talked out of it. Bledsoe was a favored player of Sterling’s and a popular player with Clippers’ fans. Bledsoe’s subsequent production doesn’t exactly make Sterling look like an idiot.

Griffin is another of Sterling’s favorites, more popular with Sterling than CP3, and in my opinion, would not be easily convinced to sign-off on a trade for Anthony who is not popular with Clipper fans and who, like Paul, has not proved himself capable of winning anything and certainly has little or no upside.

When you add in the recent shoulder injury to Chris Paul that should keep him out, at least, until the All-Star hiatus, all of this signals…

IT’S NOT GOING TO HAPPEN!

While I’m at it, let me point out that Paul has a tendency to rush himself back into the lineup post-injury; so that’s another thing to look for as we monitor this situation going forward.﻿

I was asked if I thought this was a ploy by the Knicks organization to solve their Melo problem.

Of course it is. Melo announced to his team and his fan base at the beginning of the season that he was looking forward to free agency.
Really????

People keep viewing the Clippers in the same fashion as those days when Sterling and Elgin Baylor used to run things and Sterling just made money. These aren’t those Clippers. They have basketball people running the operation and Sterling is still making money AND his team is popular.﻿

And so it goes.